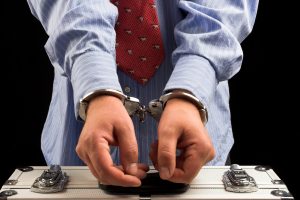 If you didn’t hear about the cash storm on I-285 back in July, I am going to guess you’ve been living under the proverbial rock. It was literally raining money! Dozens of Atlanta drivers pulled over on the highway to catch the flying cash after a door swung open on an armored truck, spilling close to $175,000 dollars on the highway. I can only imagine the chaos. Videos of the cash spill went viral and the comments poured in. Most from people joking about the incident being a “blessing from God.” We’re not for sure if it was a blessing, but anyone who took any of the cash definitely committed a crime.

After the incident, Dunwoody police warned drivers who stopped to scoop up the cash that they could face theft charges. “While we certainly understand the temptation, it’s still theft and the money should be returned,” Dunwoody Police wrote on Facebook, warning that they have plenty of video with motorists’ tag numbers to investigate. They also stated they would not charge anyone who returned the money. So, what crime did the drivers who took some of the money actually commit?

The incident was certainly a crime of opportunity. Crimes of opportunity are crimes that are committed without planning or premeditation. People see a chance to commit an act and seize the moment. The door swinging open on the armored truck in the middle of the highway was the right circumstance for a crime of opportunity to occur and, as the videos show, drivers pulled over in excitement at the thought of free money. Thing is, it wasn’t free money and the money belonged to someone other than those who took it.

Theft of Lost or Mislaid Property in Georgia

When it comes to the law, the excuse of “finders keepers” won’t keep any of the drivers out of jail if law enforcement decides to move forward with charging anyone that they can identify in the video(s) who doesn’t or refuses to return the stolen money. In Shannon v. State, 258 Ga. App. 689 (Ga. Ct. App. 2002), the Court affirmed the defendant’s guilty verdict of theft of lost or mislaid property. The defendant and a friend were at a shopping mall when they found a bank bag. The friend took the bag and the next day the defendant drove her to a local check cashing business to cash one of the checks they found inside the bag. The Court stated that the defendant “admitted that the checks belonged to the victim, that they showed the victim’s phone number and address, and that she never attempted to contact the victim to restore the property.”

Penalty for Theft of Lost or Mislaid Property in Georgia

In Georgia, under O.C.G.A. §16-8-12, a conviction of theft of lost or mislaid property can result in a misdemeanor or a felony, depending on the value of the goods that were stolen. If the property which was the subject of the theft exceeded $500 in value, then the crime is punishable as a felony and the penalty is imprisonment for not less than one year and no more than ten years. If the property is valued at less than $500, then the crime would be considered a misdemeanor in Georgia. The consequences of a misdemeanor include a fine of no more than $1,000 and no more than 12 months in jail.

Reasonable Measures: Another valid defense to a theft of lost or mislaid property charge is to provide evidence to opposing counsel and/or the court to show that the accused took reasonable measures to return the property.

Value of Stolen Property: In theft cases, it is crucial to verify that the property at the subject of the theft is actually valued to exceed more than $500. The Georgia Court of Appeals held in Denson v. State, 240 Ga. App. 207, (1999) that testimony by the owner concerning the value of the stolen property will be insufficient evidence to establish that the value of the item exceeds $500. Thus, the prosecution would have to provide additional evidence to prove the value of the property warrants a felony conviction.

Innocence: If you did not commit the crime, the best defense is to provide witness testimony proving just that. Such evidence could be used to get the charges against your dismissed or an acquittal at trial.

If you have been charged with theft of lost or mislaid property, give us a call today. A theft conviction can have serious consequences. That’s why it’s important that you hire an experienced criminal defense attorney. Call Bixon Law today to speak to one of our experienced Georgia criminal defense lawyers who will be on your side, vigorously defend your legal rights and advocate on your behalf to have your case dismissed or the charges against you reduced. As experienced trial attorneys, we are also not afraid to take your case to trial if necessary. We represent clients in Atlanta and throughout the state of Georgia. We are lawyers who are committed to helping people in difficult situations and we invite you to call us at 404-551-5684 for a free consultation today.