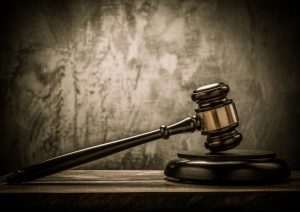 Your best friend’s girlfriend is cheating on him with a guy named Bob. He calls you and tells you that he is going to go find Bob and beat him up. He’s your best friend and—seeing how heartbroken he is about being cheated on—you agree to go with him and push Bob around a bit. You and your best friend show up at Bob’s house and a fight ensues. You haven’t thrown any punches yourself, but you are inciting the fight as your best friend hits Bob’s head against the cement pavement of his driveway. After your best friend feels Bob has had enough, you two leave Bob laying in the driveway and bleeding profusely from his head. Later that night you and your best friend are arrested and both of you are being charged with murder. Bob died!

“Murder!” you yell at the cops while being handcuffed and taken away. “I didn’t do anything. I didn’t even touch the guy.” So, why are you being charged with the actual crime of murder when you didn’t lay a single hand on Bob?

You are deemed a party to the crime because you agreed to go with your best friend to Bob’s house to inflict harm upon him and because—once at the scene of the crime—you encouraged your friend as he fought Bob. Legally, you manifested the common criminal intent with your best friend to commit a crime and because Bob died both of you will be charged with murder. In the Georgia case of Lobdell v. State, the victim died by a gun that was fired during a robbery—the Court ruled that it did not matter whether the defendant or the defendant’s accomplice pulled the trigger. Both the defendant and his accomplice could be convicted of murder. 255 Ga. 769, (1987).

If you were simply riding in the car with your best friend and he decided to stop by Bob’s house on a whim and you did not encourage or incite the crime you would probably not be found to be a party to the crime because mere presence at the scene of the crime without significant encouragement to commit the crime is not sufficient to prove the charge. Smith v. State, 188 Ga. App. 415, (1988).

Proof & Punishment for a Party to a Crime Conviction…

Because this is a criminal case, the State has to prove beyond a reasonable doubt that you are guilty, which requires a showing of evidence that you were concerned with the commission of the crime by one of the four factors under the statute. Any party to a crime who did not directly commit the crime may be indicted, tried, convicted, and punished for commission of the crime upon proof that the crime was committed and that he was a party thereto, although the person claimed to have directly committed the crime has not been prosecuted or convicted, has been convicted of a different crime or degree of crime, or is not amenable to justice or has been acquitted. O.C.G.A. §16-2-21.

Being charged with a party to a crime can be a serious offense because you are being charged with the actual crime whether it is a misdemeanor or a felony such as murder. You can spend the rest of your life in jail or even get sentenced to the death penalty for a crime you did not actually commit. The consequences of such a conviction can be dire. If you or a loved one has been charged with being a party to any crime, please call us at 404-551-5684 for a free consultation today. We are here to help!