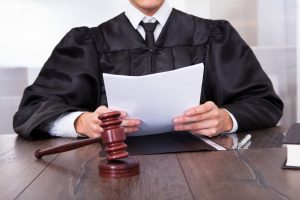 Accusations and Indictments are both forms of charging documents, which are documents that lay out the final and formal charges that an individual is charged with. After an individual is arrested or receives a citation, the arresting officer sends documentation to the District Attorney’s or the Solicitor’s office, depending on the crime- most felony cases are handled by the District Attorney, while most misdemeanors are handled by the Solicitor.\

Next, their offices evaluate the charges that the arresting officer felt there was surrounding probable cause, which function as a rough draft of the direction the state intends to take the case. The state attorney’s then compare the proposed charges against the details of the case, and add or subtract any charges that they feel may or may not be applicable to the case and compile them into a formal list of charges- this formalized list of charges can look different than the list of charges provided by the arresting officer.

From there, this list of charges takes one of two paths- it is either A) handed directly to the defendant and their counsel as an Accusation, or B) subjected to a legal version of a citizen peer review known as a Grand Jury as an additional check. As a general rule of thumb, misdemeanors are presented directly as an Accusation. Felony charges, which are more serious in nature and leave much more on the line for the defendant, are typically sent to a Grand Jury for a double-check as to whether there is probable cause for the proposed charges before the legal process proceeds.

The Grand Jury is a randomly selected group of 16-23 non-government citizens of the county where the charged crimes occurred, and their duty is to evaluate the crimes proposed and to deliberate over their validity. They will issue a ruling of “no bill” if they do not believe there is sufficient probable cause for an Indictment, or a ruling of “true bill” if they do believe there is sufficient probable cause. Neither the defendant nor their counsel are allowed to witness, participate in, or contribute to the deliberations of the Grand Jury, except in special circumstances such as when the defendant is a Police Officer or government official.

In theory, the Grand Jury Indictment process acts as a safety net that will catch erroneously charged citations and filter out charges against the innocent, as well as present an additional opportunity for a case to be dropped. In reality and practice, however, the vast majority of Grand Jury hearings will side with the prosecutor, which is the only side that they are presented. In these cases, the outcome is no different than if the defendant was charged with an Accusation, but the process is extended by this extra step.

WHICH WORKS BETTER FOR YOU?

O.C.G.A. § 17-7-70 states in part that in all felony cases, other than cases involving capital felonies, in which defendants have been bound over to the superior court, are confined in jail or released on bond pending a commitment hearing, or are in jail having waived a commitment hearing, the district attorney may default to Accusations provided that defendants going to trial under such Accusations shall, in writing, waive Indictment by a grand jury.

Boiled down, this means that if you have a non-capital felony charge and haven’t had a commitment/preliminary hearing yet, you and the prosecutor can agree to bypass a grand jury hearing. A capital felony charge is one which may result in the death penalty, and in Georgia under O.C.G.A. § 17-10-30, there are only three crimes punishable by death: (1) Treason, (2) Aircraft Hijacking, and (3) Murder.

Although there are additional crimes listed in this Georgia code that are punishable by death, they were negated in 2008 from a ruling by the U.S. Supreme Court in Kennedy v. Louisiana that the death penalty is unconstitutional when applied to non-homicidal crimes against the person, however crimes “against the state” such as treason or terrorism would not likely be unconstitutional. So while these crimes are still “on the books”, the death penalty is not enforceable because precedent has ruled it unconstitutional.

There are a few additional and more obscure rights afforded by a Grand Jury hearing, that function similarly to Double Jeopardy.

O.C.G.A. § 17-7-53 States that two returns of “no bill” by grand juries on the same charge or allegation shall be a bar to any future prosecution of a person for the same offense under the same or another name; provided, in part, that if there is newly discovered evidence, upon proof, the judge may allow a third bill to be presented, found, and prosecuted.

In the case of Weatherbed v. State, 524 S.E.2d 452, 271 Ga. 736 (Ga. 1999), Weatherbed pled guilty to an Accusation for malice murder and was sentenced to life in prison. He was represented by counsel and waived Indictment in writing. On November 28, 1995, he filed a pro se “Motion for Extension to Appeal,” which was denied. Through counsel, he filed a motion for an out-of-time appeal on August 13, 1998, asserting that his trial counsel was ineffective for not informing him of his right to appeal, and the court denied the motion.

Upon further examination, however, the court found a different yet critical error- it was unconstitutional for Weatherbed to be convicted of murder, a capital felony, without being indicted. Essentially, although the judge accepted the waiver of Indictment, it was illegal for them to do so and compromised the legality of the trial.

The court ruled: “The judgment of a court having no jurisdiction of the person or subject matter, or void for any other cause, is a mere nullity and may [271 Ga. 737] be so held in any court when it becomes material to the interest of the parties to consider it. OCGA § 17-9-4. Because of the failure to indict Weatherbed, his conviction and sentence are void and must be reversed.

Under the common law prior to the passage of OCGA § 17-7-70 and its predecessors, the superior court had no jurisdiction to try, or accept a plea of guilty of one charged with a felony until the grand jury had returned an Indictment. By [enactment of OCGA § 17-7-70] the court was given jurisdiction so to do in felony cases, but was expressly excluded therefrom as to those “punishable by death or life imprisonment.”

The court then cited Darden v. Ravan, 232 Ga. 756, 758(1), 208 S.E.2d 846 (1974) and ruled: “Without an Indictment, the trial court had no jurisdiction to accept Weatherbed’s plea and sentence him. When a trial court enters a judgment where it does not have jurisdiction, such judgment is a mere nullity; but an appeal from such an illegal judgment will not be dismissed but instead, the void judgment will be reversed.”

Also of note was their statement that the fact that the State did not seek the death penalty did not take this case outside the ambit of OCGA § 17-7-70.

If you have been accused or indicted for a charge in Georgia, give Bixon Law a call today to speak to one of our experienced Georgia criminal defense lawyers. We will vigorously defend your legal rights and advocate on your behalf to have your case dismissed or the charges against you reduced. As experienced trial attorneys, we are also not afraid to take your case to trial if necessary. We represent clients in Atlanta and throughout the state of Georgia. We are lawyers who are committed to helping people in difficult situations, and we invite you to call us at 404-551-5684 for a free consultation today.