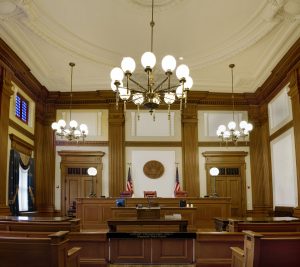 According to the AJC, an Acworth man was recently arrested for taking an upskirt photo of a woman as she shopped at a Publix supermarket. The woman reportedly told officers that she noticed a “suspicious male taking a photograph with his phone, from underneath her dress.” She then contacted store management as the man left the Publix fast, quick and in a hurry! But, he wasn’t hard to find. The supermarket’s surveillance cameras captured the entire incident and police officers tracked him down soon after viewing the footage. He was arrested and charged with one count of use or installation of device to film underneath or through an individual’s clothing.

It’s not just happening at the Publix or in Acworth, an Alpharetta man was arrested back in April on the same charge after he was caught taking upskirt photos of customers at the Windward Chic-Fil-A, according to Patch.com, which covers news in the Alpharetta-Milton area. A witness reported seeing the man pretend to drop napkins on the floor as an excuse to take his phone out underneath a customer’s skirt. “The employee was up near the front counter while the victim was waiting to get her order,” Milton Police Capt. Charles Barstow said to the AJC. “He bent down to pick up what looked like some paper napkins, and then (the witness) observed him take his phone and slide it underneath the woman’s skirt.”

A CLOSER LOOK AT UPSKIRTTING

Upskirtting is the practice of taking unauthorized pictures under a woman’s skirt and also includes under a man’s kilt. Such photographs usually capture images of the private area/underwear and are often taken in public places (i.e. the supermarket, restaurants, public transport, escalators or anywhere where there are crowds of people making it harder to spot the people taking the photos). Of course, looking up a woman’s skirt has always been viewed as impolite, rude and a violation of a woman’s privacy. However, the term upskirtting is relatively new and—with the advance of technology (i.e. camera phones, digital photography and video technology)—the practice is now regarded as a form of sexual fetishism or voyeurism. In fact, there are “specialized” websites, in which, people share “upskirtting” images along with “downblouse” and “nipple dress” photography. These images have become hot commodities, in terms of desired photography on the Internet.

UPSKIRTTING IS A FELONY IN GEORGIA

Under Georgia law, O.C.G.A. § 16-11-91, upskirtting is otherwise known as the offense of “use or installation of device to film underneath or through an individual’s clothing under certain circumstances.” Under the statute, it shall be unlawful for any person to, knowingly and without the consent of the individual observed, use or install a device for the purpose of surreptitiously observing, photographing, videotaping, filming, or video recording such individual underneath or through such individual’s clothing, for the purpose of viewing the intimate parts of the body of or the undergarments worn by such individual, under circumstances in which such individual has a reasonable expectation of privacy, regardless of whether it occurs in a public place. Further, it shall be unlawful to disseminate any image or recording with knowledge that it was taken or obtained in violation of this statute.

As used in the statute, the term: (1) “Device” means an instrument or apparatus used for observing, photographing, videotaping, recording, or transmitting visual images, including but not limited to a camera, photographic equipment, video equipment, mobile phone, or other similar equipment; and, (2) “intimate parts” means the primary genital area, anus, groin, inner thighs, or buttocks of a male or female and the breasts of a female.

The statute does not apply to the lawful activities of law enforcement and prosecution agencies; or, a business’s or entity’s surveillance device used in the ordinary course of its business, provided that signage conspicuously warns of such surveillance and the use of such device is primarily designed to detect unlawful activity.

PENALTY FOR UPSKIRTTING IN GEORGIA

Under Georgia law, O.C.G.A. § 16-11-91(c), any person convicted of use or installation of device to film underneath or through an individual’s clothing under certain circumstances shall be guilty of a felony and, upon conviction thereof, shall be punished by imprisonment of not less than one year nor more than five years, a fine of not more than $10,000.00, or both, or in the discretion of the court, as for a misdemeanor. In other countries, in extreme cases, defendants are also required to register as a sex offender.

In Gary v. The State, Publix store employee Brandon Lee Gary aimed his cellphone camera underneath a female grocery shopper’s skirt and recorded a video. Gary did this multiple times and was charged by the State of Georgia with a single count of “Unlawful Eavesdropping and Surveillance,”  O.C.G.A. § 16-11-62. The indictment did not specifically indicate which state statute he allegedly violated but the prosecution insisted Gary violated O.C.G.A. § 16-11-62(2). The law under this statute states that “it is illegal for any person, through the use of any device, without the consent of all persons observed, to observe, photograph, or record the activities of another which occur in any private place and out of public view.” Gary moved to quash the indictment, arguing that his conduct did not violate the statute because he filmed under the victim’s skirt as she walked and shopped in the aisles of a public store and, therefore, the offense did not occur in a private place. The trial court rejected Gary’s argument and, following a bench trial, convicted Gary of criminal invasion of privacy. However, the Georgia Court of Appeals reversed the decision, interpreting the term “private place” as used under the statute to mean “some physical location, out of public view and in which an individual may reasonably expect to be safe from intrusion or surveillance.” The court reasoned a specific area of an individual’s body is not a “private place” within the meaning of the statute. Therefore, Gary was not guilty of criminal invasion of privacy. Gary, 338 Ga. App. at 404, 790 S.E.2d at 151.

DEFENSES AGAINST AN UPSKIRTTING CHARGE

Alibi Witness: The offense of use or installation of device to film underneath or through an individual’s clothing under certain circumstances requires the prosecutor to prove that the defendant committed the crime beyond a reasonable doubt.  If defense counsel can present a witness or video footage showing that the defendant did not commit the alleged offense then the charges against the defendant will more than likely be dismissed.

Have you been arrested for the offense of upskirtting in Georgia? If so, call Bixon Law today. You need an experienced Georgia criminal defense lawyer on your side who will defend your legal rights and vigorously advocate on your behalf to have your case dismissed or the charges against you reduced. As experienced trial attorneys, we are also not afraid to take your case to trial if necessary. We represent clients in Atlanta and throughout the state of Georgia. We are lawyers who are committed to helping people in difficult situations and we invite you to call us at 404-551-5684 for a free consultation today.