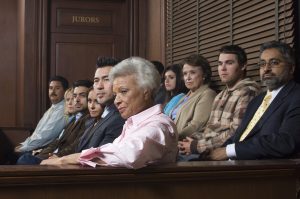 Probable cause refers to the requirement that law enforcement must have more than a mere suspicion to arrest someone, conduct a search or seize property related to an alleged crime. The requirement comes from the Fourth Amendment of the U.S. Constitution, which states:

“The right of the people to be secure in their persons, houses, papers, and effects, against unreasonable searches and seizures, shall not be violated, and no Warrants shall issue, but upon probable cause, supported by Oath or affirmation, and particularly describing the place to be searched, and the persons or things to be searched.”

The hearing itself, however, is not a trial. Evidentiary rules do apply to a preliminary hearing but are more relaxed than they are in a trial. For instance, hearsay is not admissible in most trials and hearings. However, Georgia courts allow witnesses to present hearsay testimony in preliminary hearings. Most times, the only witness is the arresting officer testifying to events he or she may not have directly observed. Also, in Georgia, the judge is permitted to find probable cause based solely on hearsay evidence.

CAN A DEFENDANT LOSE THE RIGHT TO A PRELIMINARY HEARING?

Unfortunately, yes. Although a defendant has the right to request a preliminary hearing, the defendant can also lose his or her right to a preliminary hearing if the State obtains a grand jury indictment before the hearing is held. In State v. Middlebrooks, 222 S.E.2d 343, 236 Ga. 52 (Ga. 1976), the defendant was arrested and placed in the City of Atlanta jail. He was not taken before a magistrate nor was he afforded a commitment hearing otherwise known as a preliminary hearing. Middlebrooks was indicted by a grand jury and then moved to the custody of the Fulton County Sheriff. He was then appointed counsel. Middlebrooks filed a written motion to quash the indictment for the failure of the State to afford him a commitment hearing. A trial judge conducted a hearing on the motion and overruled it, calling the case for trial. Middlebrooks was ultimately convicted; however, the Georgia Court of Appeals reversed his conviction. The State appealed to the Supreme Court of Georgia.

The Supreme Court of Georgia held that “a preliminary hearing is not a required step in a felony prosecution and that once an indictment is obtained there is no judicial oversight or review of the decision to prosecute because of any failure to hold a commitment hearing. [In] no event will we overturn a conviction on direct appeal or on collateral attack because a commitment hearing was denied appellant.”

Should you hire an attorney for a preliminary hearing? Yes! A preliminary hearing is a crucial stage of your case because if you can demonstrate that the State’s evidence against you is insufficient then the charges against you will be dismissed. That’s why it’s important that you hire an experienced criminal defense attorney. Call Bixon Law today to speak to one of our experienced Georgia criminal defense lawyers who will be on your side, vigorously defend your legal rights and advocate on your behalf to have your case dismissed or the charges against you reduced. As experienced trial attorneys, we are also not afraid to take your case to trial if necessary. We represent clients in Atlanta and throughout the state of Georgia. We are lawyers who are committed to helping people in difficult situations and we invite you to call us at 404-551-5684 for a free consultation today.

A CRIME OF OPPORTUNITY: CASH STORM ON I-...

If you didn’t hear about the cash storm on I-285 back in July, I am going to guess you’ve been living under the proverbial rock. It was literally raining money! Dozens of Atlanta drivers pulled over on the highway t...

Whether it was the popular podcast Serial or Netflix's Making a Murderer, the interest in the true crime genre has exploded and won't be letting up anytime soon. We continue to be obsessed and entertained...

WHAT IS A PRELIMINARY HEARING?