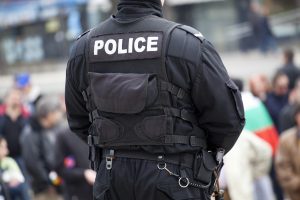 This article deals with an overview of the crime of obstruction that often result from initial encounters with law enforcement officers. Basic defenses available to the defendants are likewise discussed.

Although a crime in itself, obstruction is commonly charged in addition to crimes involving traffic violations, drugs, and alcohol intoxication. Obstruction is usually in the form of resisting arrest, fighting back, and walking or running away from law enforcement officers.

(a) A person who knowingly and willfully obstructs or hinders any law enforcement officer in the lawful discharge of his official duties is guilty of a misdemeanor, and

(b) Whoever knowingly and willingly resists, obstructs, or opposes any law enforcement officer in the lawful discharge of his or her official duties by offering or doing violence to the person of such officer or legally authorized person is guilty of a felony.

Misdemeanor obstruction is punishable by not more than 12 months imprisonment. A fine amounting to $1,000.00 can also be imposed. The judge can also impose additional penalties such as community service and mandatory classes like anger management, drug rehabilitation, and traffic rules and regulation seminars. Felony obstruction is punishable by imprisonment of not less than one nor more than five years.

To find a person guilty of obstruction or hindering law enforcement officer, the prosecution must prove the following elements:

1. The defendant must knowingly and willfully obstruct or hinder law enforcement officers.

When defendant is charged with obstruction, the basic question is whether s/he knowingly and willfully obstruct or hinder the law enforcement officers’ discharge of their duties. The statute does not specify nor enumerate particular actions that constitute obstruction or hindrance. Obstruction was made purposely broad so as to include every action which may not even be unlawful as long as it obstructs or hinders law enforcement officers in carrying out their duties. Hudson v. State, 135 Ga. App.739. Thus, before defendant can be charged with obstruction, s/he must know that s/he was being pursued or sought or arrested by officers and that s/he doesn’t have the right to leave or walk away.

2. Law enforcement officers must be discharging their official duties.

If officers are not acting in the lawful discharge of their official duties or in a place within their jurisdiction, defendant has the right to walk away from the encounter. For example, traffic law enforcers from one county cannot pull over someone who is speeding in another county outside their jurisdiction.

3. In felony obstruction, violence or attempt of violence must be present.

Resulting physical injury sustained by officers following struggle with a defendant can be used as an evidence of violence. Actual physical injury is however not always necessary. Threatening an officer with bodily harm is enough to make obstruction a felony. The slightest resistance and use of abusive language or profanity can even be interpreted by the law enforcement officers as obstruction or hindrance of their duties.

To determine whether a person can lawfully leave police-citizen encounters without resulting to an obstruction charge, it is very important to know the three tiers of police-citizen encounter which include (1) communication between police and citizen involving no coercion or detention, (2) brief seizures or stops that must be supported by reasonable suspicion, and (3) full-scale arrests that must be supported by probable cause. Ewumi v. State, 727 S.E.2d 257, 315 Ga. App. 656 (Ct. App. 2012).

If the encounter between officer and defendant is a first-tier encounter where no seizures or arrests are involved, the defendant can walk away freely without being charged with obstruction. During the first-tier encounter, law enforcement officers may approach citizens, ask for their identification, ask for their consent to search the vehicle and immediate premises, ask for their consent to conduct body search, and freely question citizens as long as the officers do not detain the citizens or convey the message that the citizens may not leave. Normally, only questions pertaining to the citizens’ identity are required to be answered. Citizens may choose not to answer any other questions nor give consent to any kind of search. In fact, it is better not to answer any questions and give consent to any searches. If the officers want more information, they can request for subpoena to compel citizens to talk about what they know. Subpoena, however, are mostly used during formal prosecution proceedings such grand jury proceedings, at deposition, and at trial and not during field investigation.

To initiate second-tier encounters, officers must order or command the defendant not to leave the premise and to stay in the crime scene/area for purpose of investigation. Officers must indicate that compliance to officers’ orders is mandatory. If the officers did not make clear that defendant “must” obey, defendant’s act of walking away does not constitute knowing and willing disobedience and obstruction. Walking away or attempting to walk away BEFORE a command to stop will not support a charge much less conviction for obstruction of an officer. Whether the officers’ use of particular words constitute “commands” that must be complied with by defendant is a question of fact. There is a huge difference between commands and requests. The phrases “Hey, come here for a second” and “Come here, sir, let me talk to you for a second” are examples of requests not commands which must be complied with. Ewumi v State, 315 Ga.App. 656. How the officers’ words are used and the tones of their voice during the encounter are critical in determining what level or kind of encounter took place between the officers and defendants. This is one of the reasons why audio and video recordings of the encounter taken by the officers and/or the defendants are very important evidence during criminal prosecution or trials.

In addition to knowing the nature of the police encounter, Terry analysis (based on the case Terry v. Ohio, 392 U.S. 1, 88 S.Ct. 1868) must be conducted in order to determine whether officers were engaged in lawful duties and whether their initial encounter with the defendant was a second-tier or first-tier encounter from which the defendant could lawfully flee. So long as a reasonable person would feel free to disregard the officers and go about his business, the encounter is consensual and no reasonable suspicion is required. Police officers can intentionally or willfully terminate consensual encounters by means of physical force or show of authority. Examples of physical force and show of authority include police officer positioning his patrol car to prevent defendant’s vehicle from leaving or driving away, police officer turning on the flashing red and blue lights from patrol car, officer displaying his government-issued weapon, physical touching/restraint, officer’s imposing tone of voice, and officer’s use of authoritative language.

There are times when it is better to exercise one’s rights to remain silent than to keep talking during police encounter. Refusal to answer the questions of the law enforcement officers is not obstruction in itself. More importantly, when officers identify and zero in a particular defendant to be the perpetrator of a crime and try to gather more incriminating evidence and confession, it is wiser for the defendant to exercise his right against self-incrimination. If defendant decided to answer questions and lied with the intention of misleading the officers as to his identity and other account of the crime under investigation, s/he may be charged with false report of a crime under O.C.G.A. §16-10-26 or giving false name, address, or birthdate under O.C.G.A. §16-10-25.

There is no requirement to help law enforcement officers by providing information during crime investigations. Although helping solve crimes and making sure justice is done to everyone is a trait of a good citizen, everyone must be very cautious when deciding to help law enforcement officers during crime investigations. The information one provides might hunt him especially because no one remembers everything much less knows every nuance of a story. Moreover, everyone forgets some part of the story as time goes by. Not saying a word is definitely better than telling half-truth and fabricating stories.

If law enforcement officers keep on asking questions beyond one’s identity, and answering such questions will not be for one’s best interest, it is better to mention one’s rights under 6th amendment and politely and unequivocally ask for a lawyer. Requests for a lawyer must be very clear and unambiguous without being misinterpreted by the officers. Every time officers ask something about the incident under investigation, defendant must assert his/her right and ask for a lawyer and shut up.

Two important questions to ask law enforcement officers in any encounter: Am I under arrest? Am I free to go? If defendant is not under arrest, s/he must respectfully ask for permission to leave and excuse herself/himself. If one feels he is in the second-tier encounter, he must invoke his right to remain silent and his right to a lawyer. If charged with obstruction whether as separate crime or with other charges, don’t hesitate to call Bixon Law at 404-551-5684.